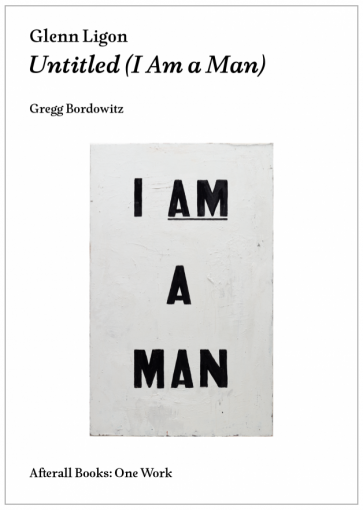 Glenn Ligon’s iconic Untitled (I am a Man) (1988) remembers the signs carried by striking African-American sanitation workers in Memphis, Tennessee in 1968. In this study of the painting Gregg Bordowitz discusses its relevance to representations of self, race and gender, with reference to other key works by Ligon such as the Profile Series (1990-91) as well as Narratives and Runaways (both 1993).

At this moment of political upheaval and dissent against the resurgence of fascism in the United States, Bordowitz’s timely account cites historical figures ranging from Sojourner Truth, who delivered her famous speech ‘Ain't I A Woman?’ in 1851, to Bo Diddley, whose song ‘I'm a Man’ came out in 1955. Examining the theoretical writings of André Green, Stuart Hall and Charles Sanders Peirce, the author makes a case for Thirdness as a function, operation or law of meaning-making, not limited by the viewer's gender, sexuality, race, class or personal history.

This title is part of the One Work book series, which focuses on the artworks that have significantly shaped the way we understand art and its history.