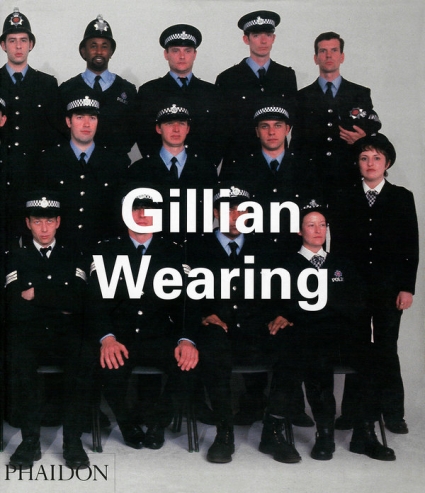 British artist Gillian Wearing, winner of the 1997 Turner Prize, uses photography and video to explore the intimacies and complexities of everyday life. Borrowing from popular culture, her work is disturbing and confessional. In 1992 she began the acclaimed series 'Signs that say what you want them to say and not Signs that say what someone else wants them to say', in which random passers-by are photographed holding messages they've written, such as the mild-mannered young businessman whose sign unexpectedly reads 'I'm Desperate'.

Wearing's work borrows from familiar forms of popular culture to produce direct, revealing records of deep-seated human trauma and emotion, often adopting the methods of television documentaries for her 'fly-on-the-wall' view of people's lives. Her videos can be alarming, as in Confess All ... in which masked individuals confess their darkest secrets, or humorous, as in (Slight) Reprise - a sampler of adults playing 'air guitar' in the fantasy rock stadium of their bedrooms. Her art can be disconcerting or uplifting: an honest portrait of the many sides to contemporary life.

With exhibitions in Britain, the US, Europe and Japan, Wearing is among the best-known and most internationally recognized of the recent generation of British artists. This is the first publication ever to survey this remarkable young artist's gripping work in its entirety.

Russell Ferguson of UCLA's  Hammer Museum contextualizes Wearing's work in relation to historical precedents in painting, photography and video art. Curator at the Whitney Museum of American Art Donna De Salvo discusses with the artist her collaborative approach towards her work and its subjects. London-based critic John Slyce focuses on Wearing's work 10-16, a remarkable video installation that charts our transition from childhood to adolescence. The artist has selected transcripts from director Michael Apted's acclaimed British television documentary series Seven Up, an important influence on the process Wearing uses in her own work. Published here for the first time in full are the transcripts of the artist's video works.