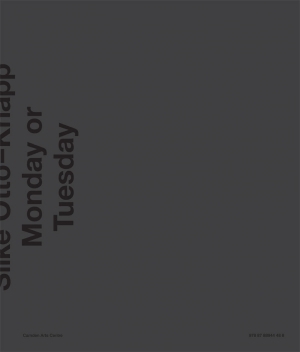 Exhibition catalogue co-produced with Kunsthal Charlottenborg, Copenhagen where some of the works in the exhibition were shown in 2013. Foreword by Jacob Fabricius and Jenni Lomax, with an essay by Sarah Buchmann. In Monday or Tuesday, Otto-Knapp’s subjects are rendered almost entirely in black and silver pigments which appear to bathe the works in moonlight, the source of which at times looms in the distance, ambiguously appearing as a stage instruction or theatrical lighting device. The works bring together the reality of landscape with the pretence of stage design to raise questions around decorative surface, spatial depth and pictorial construction.