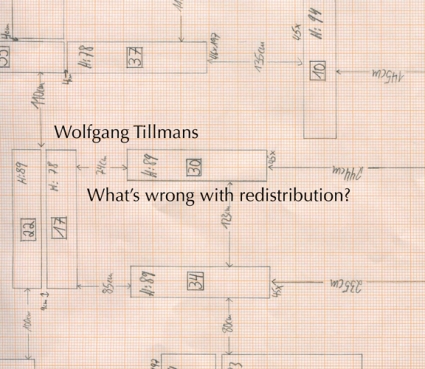 Wolfgang Tillmans’s (born 1968) Truth Study Centre has been a fixed component of his exhibitions since he first showed a version of the multi-part tabletop installation in 2005. Often arising from local circumstances and current issues at the time of their creation, the Truth Study Centre works mark an endeavor to establish a clear perspective in confusing times. The scope and complexity of this project become apparent for the first time through this book—the second, following Manual (2007), dedicated to this set of works.

Over the span of 320 pages (printed using a high-resolution technique), Tillmans presents an alternative chronology of the present. Far exceeding his original and main medium of photography, he juxtaposes a variety of contrary opinions, statements, and comparisons on recurring table formats. The dimensions of the wooden tables, which he designed himself, are not arbitrary: they are built using standard British door panels, 78 inches long, and with one of four different standard widths.

This book gives an overview, through lavish reproductions, of this new form of collage in which picture, text, and object “are only kept in place by their own weight,” as the photographer puts it. An essay by Tom McDonough, Professor for Art History at Birmingham University, New York, places Tillmans’s project within the context of 20th-century collage, from Hannah Höch to Robert Rauschenberg. This artist’s book, produced in Tillmans’s Berlin atelier, includes a Fresnel magnifying glass, making it possible to zoom in on the contents and read even the smallest of printed texts.